This last week we went on a bit of an adventure.  My hubby and I took our boat, a 48ft Silverton called Miller Time(for our name not the beer), from Virginia to Charleston, South Carolina.  We rode her down through the Inner Coastal Waterway(the ICW).  The ICW runs the entire length of the East coast allowing boaters to navigate all the way to south Florida without needing to venture into the ocean.  We intend to travel to South Florida and the Bahamas in 2012, so we figured taking Miller time part way for the winter would be a good idea.  We will also be able to visit with our daughter, she is in college in Charleston.  I will be setting up a blog soon that will recount the days of this latest trip as well as journal the remainder of our journey to Bahamas in 2012.  I will post the link here when I get it set up.

We have met some great folks along this leg of the journey and I can’t wait to tell you more about them.  We have also learned numerous valuable lessons.  At the start of our trip we had the fortune of being able to follow along with two other boats and their more experienced captains.  It was helpful to have someone leading the way.  The last two days of the trip, we were on our own.  No longer able to simply follow the crowd, we felt a surge of excitement and trepidation for what was ahead.  My diligent captain had everything planned and plotted and we were ready for the day’s challenges.  Most of the trip would be uneventful, the weather was perfect, the scenery breathtaking and only a bridge or two to fit under(more about bridges in the blog from the trip).  There was only one issue we felt a bit uneasy about, The Rock Pile.

The ICW was literally cut into the earth by the Corp of Engineers.   The waterway varies in width and depth.  While it is surprisingly deep, there are places where it is narrow making single file passage a must.  Most of the ground around and below is a soft sand or clay.  Boats that venture beyond the marked channel may find themselves stuck.  The Rock Pile is not so kind.  For 5 miles the ICW is nothing but unforgiving rock boarding one of its more narrow passages.  We had been encouraged to proceed with caution and perhaps find a commercial boat or experienced captain to follow.

As we approached the section we dreaded most, we could hear chatter on our VHF radio of other boats in the area.  Since so many boats are heading the same direction this time of year we often saw the same boats from time to time, or perhaps stayed at the same marina.  After a while you become familiar with your fellow ICW travelers.  We recognized the hailing call of one such boat, 70ft Lazarus(fancy boat) named Touch the Sun.  We knew the captain was experienced with the ICW.  We could tell from the radio chatter they were not far behind us.  We slowed and waited for them to catch up.   When we had them in sight we radioed them and requested to follow them through the Rock Pile.  “No problem captain,” came his response, “when I pass you, just get inside my wake and you will be fine.”

Boats create wakes as they pass through water.  The bigger boat is, usually the larger the wake.  Speed and boat hull shape also effect wake size.  Wakes can be very dangerous.  Wakes flow out at angles from the boat’s bow creating waves that can damage shorelines, rock smaller boats or send sailboats into a chaotic roll.  Being outside the wake means you will most likely find yourself rocking and rolling over a rather large wave, but inside the wake(just behind the boat) it is calm.  Touch the Sun’s invite to fall into his wake was much appreciated.

We had to keep up our speed to stay tight behind him.  The further we got into the Rock Pile the more grateful I was for their leadership.  Dark and menacing, the rocky ledge stretched out towards our boat like a mob of fans trying to touch a rock star.   The wake and waves created by Touch the Sun crashed against the shore and sprayed water in the air much like the waves on the rocky shores of the north Atlantic.   As long as we stayed tucked inside his wake, we knew we would not hit the rocks.  We knew that wherever they found safe passage we would also find safe passage.   When we finally got beyond the Rock Pile we breathed a sigh of relief.  The remainder of the trip held no greater anxiety and we comfortably found our way to the marina in Charleston.

We are enjoying a relaxing morning here in South Carolina.  After getting up and underway at dawn for the last five days, it is nice to just sit and ease into the day.  As I think about all the lessons learned along the way here, I cannot stop dwelling on Touch the Sun’s captain’s reassuring radio transmission, “When I pass you, get inside my wake and you will be fine.”    We did, and we were.  It was not always easy to stay in his wake as my hubby/captain will attest, but knowing they had passed before us gave us the confidence to keep going and assurance that we would pass safely.

Today we honor our veterans, many who have gone before us to create a safe passage for us.  I also think the numerous people God has placed in my life who have created a wake in which I can find confidence and assurance.  Our journeys may not always be easy, but today I am thanking God for all the wakes in which I now safely travel.

Following a long list of God’s faithful in Hebrews 11, Hebrew 12:1 refers to some of those who have created wakes before us as a “cloud of witnesses”….

“Therefore, since we are surrounded by so great a cloud of witnesses, let us throw off everything that hinders and the sin that entangles, and let us run with perseverance the race marked out for us.” 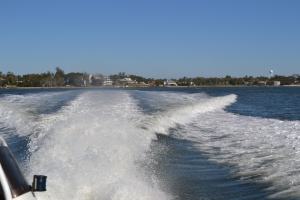 One Response to “Safe Inside the Wake”