Filed under: Christianity,devotionals,humor,life — tlmiller82 @ 9:06 am 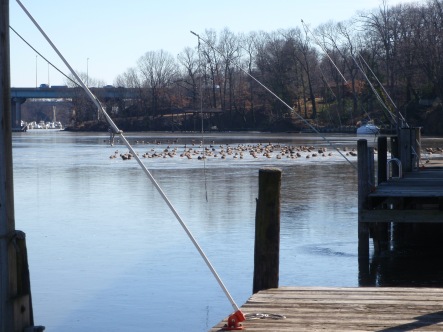 There we were, looking out on a frozen river and boat laden dock.  While my husband worked diligently to free our boat from the grip of the ice monster and install a device used to keep ice away, I found myself huddled behind Steven.  Yes, I was using my 22yr old as a windsheild.  Gone are the days when I could protect him from gusts of freezing wind I suppose.  But as I stood there(my form of “helping” my husband) in the cold I found it difficult to imagine how I could have once thought this kind of cold was fun.   My memories of digging forts out of snow banks and ice skating until my limbs were numb on a small rink my dad formed for us in the back yard are based on real events, yet how could I have found such delight in such frigid surroundings.  This day, instead of enjoying myself, I can hear my very grown up voice whine and complain as I stand bundled against the elements.   I guess with the passing of time and perspective our sensory receptors send amended messages to our brains.  Now instead of “weeeee” and “yipeee” my brain registers “whoa” and “oh my”, when encountering bitter cold.  When I ventured beyond the protection of my small wall of a son, I begain to appreciate the calm of my surroundings.  Ice on the river brings many things to a halt.  As I watched the geese standing on the river, the scene was at once a depiction of nature’s beauty , yet quite  unnatural to behold.  The river was a picture of movement waiting to be set free…and free it did become.  Some places let loose the current in response to an impact of some sort, cracking and breaking and shifting.  In other areas the river began to move due to the gradual thinning of the frozen membrane that once held it still.  As temperatures rose and more current flowed melting began to take place.  Movement once held at bay now freely following its path past our docks.  It may freeze agian, but it will not stay still forever.

Today we await the inauguration of our 44th president.  He represents to many, not only a change in administration, but also an undeniable symbol of the impact of any individual on the movement of our nation.    Words and actions of those who came before…some with hard, ice cracking, impact…others  a part of the gradual wearing away of ideas and stubburn bonds that held many from their goals or dreams.    But altogether, individuals, set our nation into motion, unfreezing us from the grip of stillness.   We are a nation that desires to move, is designed to change and determined to adapt.  No doubt there will be a freeze again….but nothing stays frozen forever.

5 Responses to “Ice on the river”