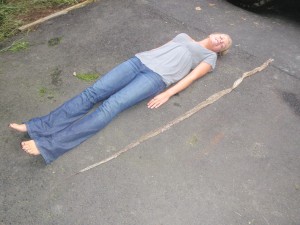 Okay, I live near a bunch of woods.  Since we live in such close proximity to the woods I have come to accept certain inevitable house guests.  I have made my peace with the spiders that seem to inhabit every corner of my house even after I have cleaned. (They eat unwanted insects)

I have even stopped freaking out when the occasional mouse finds its way into the house. (They are not welcome guest mind you, it’s just that I am no longer surprised or appalled they show up from time to time.)  Over the years we have seen everything from snakes, lizards, frogs, deer, fox, and of course there was the one year we had a bear in the yard.  I think I have handled most of these encounters with good natured appreciation for each species. (Well, except for the bear…but hey, who expects a  bear on their door step?)  Of all the critters that call my yard home there is only one which seems to test my patience…THE SNAKE.

As I mentioned earlier, I know we have mice somewhere in the walls, foundation or garage at some time during each year.  This is why snakes are not necessarily a bad thing.  We have seen black snakes in vicinity in past years.  I fight the urge to chop them with a hoe knowing they play an important role in my yard’s ecosystem.  In the spring a young snake made its way into our home (see previous Spring post for details).  Until few weeks ago, when another small snake found its way inside the house, I did not think we had a problem.  We have since found a nest and two holes we think are snake portals into our dry wall.  What prompted an appointment with a wildlife specialist was the finding of a skin recently shed by one of our garage dwelling reptile buddies.  When we laid the skin out on the driveway we were shocked by the length….note photo of 5’ 7’’ daughter beside snake skin.   That is just too big; I don’t care how helpful it is controlling mice!

The enormity of our snake issue has me rethinking my former bravado when it comes to such creepy crawly things.  I have a new appreciation for what Moses endured when he challenged God’s choice to send him to the Pharaoh.  In Exodus 3 & 4 God reveals Himself to Moses and tells him of His plan for Moses to go before the Pharaoh and arrange the freedom of the Israelites.  Moses’ response was pretty much, “Seriously God?  You’re telling me you can’t’ find someone better for this task?”, and “What if they don’t believe me?”.    Due to his reluctance to trust God’s choice of sending him, God told Moses to toss down his staff.  So far, no big deal…easy to follow that request I’m sure.  He tossed it down and it turned into a snake.  Now this is where the account of this interaction sits different with me than it did in past readings.

You see, in the past I envisioned a snake about 3 ft’ long…startling, but not terrifying.  As I reread these passages today I realized the snake Moses saw before him had to have been 6ft. easily.  The staff he threw down was not a waist high cane.  It was a walking stick, weapon and tool which would have towered slightly above his height.  Let’s assume Moses was taller than my daughter, or at least as tall, are you getting the picture here?  That was probably a BIG snake!  Exodus 4:3 says “…and Moses fled from it.”!  I would have too!   But here is the kicker…Exodus 4:4 God tells poor Moses, “stretch out your hand and grab it by the tail”.  !!!!  I cannot see myself grabbing the tail of the snake that is currently living somewhere below my garage.  I think I would have looked at God and said, “You’re God, You pick it up!”  Yet we read that Moses obeyed God’s direction.   I don’t see the mention of Moses hesitating to pick up this monster sized snake!   Here we see in Moses what God had seen since He formed him in his mother’s womb, and why He probably chose him for such a difficult task.  Moses had a strong reliance on God.  He had a deep faith and obedient heart that overcame the shallow insecure outer shell that once hid this strength.  When he heard God’s simple, yet crazy, command to pick up the snake, he did it.   What God asked of Moses,  obedience not based on understanding or logic, He also asks of us.

Lord help me to know Your will and to follow it inspite of my own insecutity, trusting as  Moses eventually did, that You know me best and call me with the fullness of that knowledge.